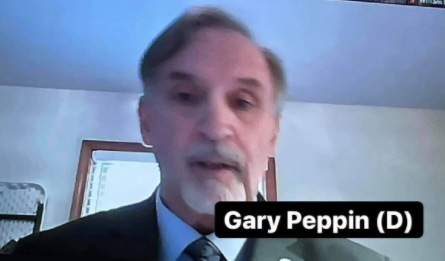 It all started April 28th when Peppin voted “Yes”, to fly Transgender Flags at all Genesee County governmental buildings.

In the same meeting, Peppin was a “Yes” vote for the Black Lives Matter C.R.O.W.N act which stands for “creating a respectful and open world for Natural hair” which is a policy that prohibits race based discrimination for African American’s hair.

These controversial votes caused members of the community to be concerned as to the direction of the Commission.

Davison Township resident Morgan Jackson says she went to the meeting to express her concerns and was shut out of the zoom call.

“We have a County that is going bankrupt and Peppin’s focus is flying transgender flags and passing Black Lives Matter resoultions. He (Peppin) is clearly out of touch with his constituents in the Davison community.”

Fast forward to the next Genesee County Board of Commission meeting, May 12th, Peppin was the deciding vote to give the ‘thin blue line’ Police Appreciation flag a “No” vote, sending it back to committee.

There were over a dozen speakers during public comment who spoke against the ‘thin blue flag’ including Flint resident Jo Ikigai.

“We are looking to abolish the Police…you need to be careful when you look at the history of Police…it started off as slave catching” Ikigai said.

On the contrary, many residents spoke in favor of passing the resolution including the Flushing City Police Chief who was in attendance.

Genesee Township resident Dana Whitehead spoke on behalf of herself and the Retired Flint Police Association. “The thin blue line should not be made political, it should be an automatic support for our police”. When speaking for herself Whitehead had asked the Commission why they can fly transgender flags, and pass BLM resoultions but nothing for Police.

The proposed resolution that Peppin had shot down stated: “that all county buildings will fly the Thin Blue Line Flag as furtherance of this recognition and to publicly salute the service of law enforcement officers in our community as well as those of our state and nation and honor police who place their lives on the line for the safety and security of their communities.”

The board vote was 4-5, Peppin was the 5th vote squashing the ‘thin blue line’ flag resolution.

Commissioners Shumaker (R- Fenton), Young (D-Grand Blanc), Davis (R-Flushing) and Newman (D-Clayton Twp) were the only ones to support the resolution.

According to the Genesee County Commission records, Gary Peppin (D-Davison), has not been in his office since January 12th, a week after taking the oath of office. Peppin has missed nearly three months of meetings and has just started attending meetings from zoom at his home in Davison. The reasoning for his lack of attendance is unknown at this time.